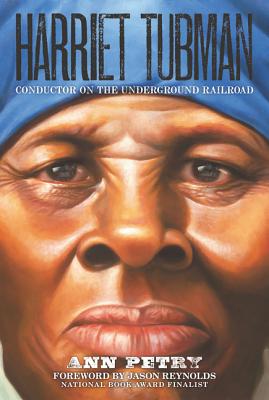 Harriet Tubman: Conductor on the Underground Railroad was praised by the New Yorker as “an evocative portrait,” and by the Chicago Tribune as “superb.” It is a gripping and accessible portrait of the heroic woman who guided more than 300 enslaved people to freedom.

Harriet Tubman was born in slavery and dreamed of being free. She was willing to risk everything—including her own life—to see that dream come true. After her daring escape, Harriet became a conductor on the secret Underground Railroad, helping others make the dangerous journey to freedom.

This award-winning introduction to the late abolitionist, which was named an ALA Notable Book and a New York Times Outstanding Book, includes additional educational back matter such as a timeline, discussion questions, and extension activities.

Ann Petry was the acclaimed author of the adult novel The Street, a groundbreaking literary work about life in Harlem, which sold over a million copies. She also wrote several books for young readers, including Harriet Tubman: Conductor on the Underground Railroad, the story of the courageous and heroic woman who struggled and fought for her people before and during the Civil War.

“An evocative portrait.” — The New Yorker

“Told with insight, style, and a fine narrative skill.” — The New York Times

“A superb biography. The vitality of this remarkable woman leaps from every page.” — Chicago Tribune

“An unusually well-written and moving life of the ‘Moses of her people.’’’ — The Horn Book

“Ann Petry, writing with sympathy and fidelity, has made Harriet Tubman live for present-day readers of any age. Deeply moving.” — Christian Science Monitor