The Billionaire's Vinegar: The Mystery of the World's Most Expensive Bottle of Wine (Paperback) 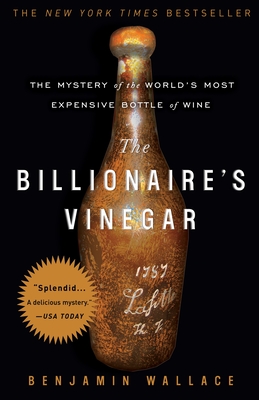 “Benjamin Wallace has uncorked an absolutely fascinating account of the world's most expensive bottle of wine, an intoxicating read with the complexity and nuances of a great vintage. As your book 'sommelier' I recommend that you drink deep of this heady narrative concerning world-class connoisseurs, deep-pocketed collectors, and -- quite possibly -- a diabolically clever con man.”
— Joe Drabyak, Chester County Book & Music Company, West Chester, PA

The rivetingly strange story of the world's most expensive bottle of wine, and the even stranger characters whose lives have intersected with it.

The New York Times bestseller, updated with a new epilogue, that tells the true story of a 1787 Château Lafite Bordeaux—supposedly owned by Thomas Jefferson—that sold for $156,000 at auction and of the eccentrics whose lives intersected with it.

Was it truly entombed in a Paris cellar for two hundred years? Or did it come from a secret Nazi bunker? Or from the moldy basement of a devilishly brilliant con artist? As Benjamin Wallace unravels the mystery, we meet a gallery of intriguing players—from the bicycle-riding British auctioneer who speaks of wines as if they are women to the obsessive wine collector who discovered the bottle.

Suspenseful and thrillingly strange, this is the vintage tale of what could be the most elaborate con since the Hitler diaries.

“Part detective story, part wine history, this is one juicy tale, even for those with no interest in the fruit of the vine. . . . As delicious as a true vintage Lafite.” —BusinessWeek

BENJAMIN WALLACE, a New York Times bestselling author, has written for GQ, the Washington Post, Food & Wine, and Philadelphia, where he was the executive editor. He lives in Brooklyn.

“The season's wine reading cannot get off to a better start than with The Billionaire’s Vinegar,  one of the rare books on wine that transcends the genre ...Though the story is the collector’s world, the subject is also greed and how it can contort reality to fit one’s desires. It’s been optioned for Hollywood. I hope the movie’s as good as the book.”
—New York Times

“This is a captivating tale, even if you care nothing about wine.”
—Wall Street Journal

“Fine writing, great reporting, and a story so delicious you could have it for dessert.”
—Fortune

“A gem of a book...Mr. Wallace answers questions raised about Rodenstock and his remarkable find with a narrative that moves slowly and gracefully through lively and interesting information. Mr. Wallace seems to consciously take his time revealing what he knows, much like someone tasting a fine wine. There is no rush or urgency. Just a tale that oenophiles, history buffs and ordinary wine lovers alike will savor.”
—Washington Times

“This is a gripping story, expertly handled by Benjamin Wallace who writes with wit and verve, drawing the reader into a subculture strewn with eccentrics and monomaniacs...Full of detail that will delight wine lovers. It will also appeal to anyone who merely savours a great tale, well told.”
—The Economist

“A page-turner…What makes Wallace's book worth reading is the way he fleshes out the tale with entertaining digressions into Jefferson's wine adventures, how to fake wines (who knew a shotgun blast could make a bottle look old?) and dead-on portraits of several major wine personalities who intersected unhappily with the wines.”
—Bloomberg

“The Billionaire's Vinegar, is at once a detective story and a sensational history—of wine, wine snobs and the most expensive bottle of wine ever sold.”
—NPR.org

“This book has no right to be as exciting as it is.”
—Good Morning America

“What people will be talking about.”
—GQ

“Call it wine noir... a reminder that great wine should be consumed, not just collected.”
—Men's Health

“For anyone with at least a curiosity about precious old wines and the love of a good story, this well-crafted piece of journalism may prove as intriguing and enjoyable as a fine old Bordeaux.”
—Seattle Times

“Nicely peels back the covers of a world most of us will never see.”
—Dallas Morning News

“The book handles a dozen tangential plots with Dickensian ease... The Billionaire's Vinegar is the rare book that transcends its topic, reaching out to anyone interested in a good mystery, while at the same time going into enough detail to be of interest to a serious wine drinker.”
—Pittsburgh Post-Gazette

“An astonishing tale of intrigue, greed, pride and ego... Is this book worth your time and effort to find and read? Undoubtedly.”
—Dayton Daily News

“A rich blend of historical narrative and page-flipping mystery that will keep both oenophiles and teetotalers riveted.”
—Philadelphia Magazine

“Brings together the disparate themes of wealth, greed, narcissism, ego, and fraud, with a dollop of history and some nifty detective work thrown in for good measure... Wallace's book deserves the broad readership at which it is clearly aiming, reaching far beyond the confines of the wine trade and wine collectors.”
—The World of Fine Wine

“Masterfully unravel[s] a fast-paced tale of power, deception, and oenophilic excess... has the feverish momentum of a page-turner... offering an unprecedented portrait of a case that rocked an impossibly exclusive world to its foundation.”
—Bold Type

“Truly riveting... For anyone familiar with the wine world, the book will provide extraordinary enjoyment, more or less as beach material. But this book has great potential to cross over to a mainstream audience... In some ways, the most interesting aspect of the story is how people want so much to believe in things, and so, they do. That is really the take-away message of the book, and Wallace has done a lovely job of presenting it.”
—Barron's

“A superb storyteller... engaging and vivid, Wallace's prose is supremely well composed, and turns a complex web of commercial transactions—albeit an intriguing one—into a mystery of Hitchcockian proportions.”
—Decanter

“Benjamin Wallace's brilliant new book is a work of carefully-researched fact, rather than fiction, but it's not short of drama, intrigue or remarkable personalities... a fascinating, page-flipping mystery... a forensic, and frequently amusing, examination of the world of fine and rare wine.”
—Wine & Spirit

“A rich depiction of the history of wine—its prestige, its chemistry, its recurring susceptibility to fraudulence... There is delicious insider's gossip aplenty in this book, enough to keep any serious wine aficionado turning the pages. And for those with a more casual interest, Wallace's centuries-spanning narrative and sharp eye for detail make the book a fun and informative read.”
—ImbibeMagazine.com

“So well written that it is an absolute pleasure to read... [a] profound look into the world of wine collecting.”
—Dr. Vino's Wine Blog

“A modern nonfiction who done it... transports the reader back and forth through time and across the sea, from the boardrooms of 20th century publishing tycoons to 18th century France and the young American nation... Pull the cork on The Billionaire's Vinegar and you will sip at it, enjoying it as it develops, until every last drop is drunk.”
—The Gloucester Daily Times

“A tale peopled with famous and infamous characters, plunder and plonk and more than a dash of hoax and history.”
—Reuters

“A briskly written tale of intrigue and deceit.”
—Hemispheres

“[T]his thoroughly researched, engagingly written book presents the evidence from both sides... Full of entertaining real life personalities, it's a brilliant analysis of the world of fine and rare wines. It deserves to win every prize going.”
—The Guardian

“An old bottle of wine is rare, but a ripping good mystery about one is rarer still... Wallace's narrative leads us into a world of heiresses, celebrities, rogues, bankers, tomb raiders, dilettantes, villains, Arab potentates, millionaires and, as the tale darkens, forensic scientists, glass and handwriting experts, Jefferson scholars, FBI agents and federal court judges...For those who can't stomach another wine guide, The Billionaire's Vinegar makes learning about wine palatable... Wallace brings a reporter's discipline to both the depth of his research and to the even-handed treatment of his findings.”
—The Globe and Mail (CANADA)

“Wallace sips the story slowly, taking leisurely digressions into techniques for faking wine and detecting same with everything from Monticello scholarship to nuclear physics. He paints a colorful backdrop of eccentric oenophiles, decadent tastings and overripe flavor rhetoric… Investigating wines so old and rare they could taste like anything, he playfully questions the very foundations of connoisseurship.”
—Publishers Weekly

“[Wallace] offers a revealing look at the influx into the esoteric field of wine connoisseurship of major-player egos and big money, which created a tricky and rarified market similar to that for expensive art—and encouraged fakes in both…There's no denying the appeal of this enthrallingly mad and recondite subject.”
—Kirkus Reviews

“It is the fine details--the bouquet, the body, the notes, the finish--that make this book such a lasting pleasure, to be savored and remembered long after the last page is turned. Ben Wallace has told a splendid story just wonderfully, his touch light and deft, his instinct pitch-perfect. Of all the marvelous legends of the wine trade, this curiously unforgettable saga most amply deserves the appellation: a classic.”
—Simon Winchester, author of The Professor and the Madman and A Crack in the Edge of the World

“The Billionaire’s Vinegar is the ultimate page-turner. Written with literary intelligence, it has a cast of characters like something out Fawlty Towers meets The Departed. It takes you into a subculture so deep and delicious, you can almost taste the wine that turns so many seemingly rational people into madmen. It is superb nonfiction.”
—Buzz Bissinger, author of Friday Night Lights

“A great read... I think most readers will enjoy the detail and, like me, learn much from it... All in all this book is thoroughly recommended.”
—Jancis Robinson