I Could Do That!: Esther Morris Gets Women the Vote (Hardcover) 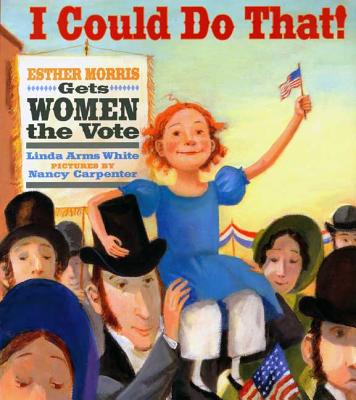 "I could do that," says six-year-old Esther as she watches her mother making tea. Start her own business at the age of nineteen? Why, she could do that, too. But one thing Esther and other women could NOT do was vote. Only men could do that.

With lively text and humorous illustrations as full of spirit as Esther herself, this striking picture book biography shows how one girl's gumption propels her through a life filled with challenges until, in 1869, she wins the vote for women in Wyoming Territory – the first time ever in the United States!

Linda Arms White's humorous books include Comes a Wind, an American Bookseller Pick of the Lists. She lives outside Allenspark, Colorado.

Nancy Carpenter has written and illustrated many books for children, including Fannie in the Kitchen by Deborah Hopkinson, a Publishers Weekly Best Book, and Twister by Darleen Bailey Beard. She lives in Brooklyn, New York.

“Carpenter's paintings, which combine Giselle Potter's grace with a slightly rough-hewn Western edge, are especially entertaining and effective at depicting Morris as a pillar of steadiness and calm.” —Bulletin of the Center for Children's Books