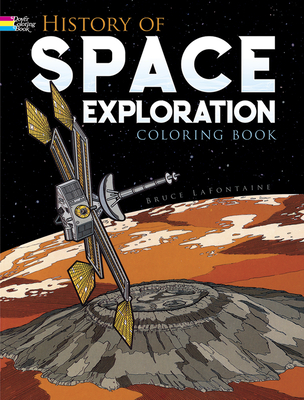 Explore the sand dunes of Mars; Saturn's giant moon, Titan; the Moon's Sea of Tranquility, and other distant worlds in this thrilling coloring book, which highlights major milestones in space exploration.
Forty-four carefully researched, accurately drawn illustrations re-create a variety of exciting scenes that chronicle human attempts to explore space -- from the launch of the first liquid-fuel rocket in 1926 to the tragedy of the space shuttle Challenger in January 1986.
Other fully captioned drawings include the start of the "Space Race" with the Soviet launch of Sputnik 1 (1957); the U. S. launch of a chimp into suborbital space (1961); first U. S. space walk (Ed White, June 1965); first space rendezvous (December 1965); first men on the moon (1969); Sally Ride, first U. S. woman astronaut (1983); and much more.

An award-winning artist, writer, and graphic designer, Bruce LaFontaine specializes in books about history, science, transportation, and architecture. Bruce has written and illustrated 70 Dover titles, and his work has appeared in Scientific American, The Wall Street Journal, and other prominent publications.