We Will Not Be Silent: The White Rose Student Resistance Movement That Defied Adolf Hitler (Hardcover) 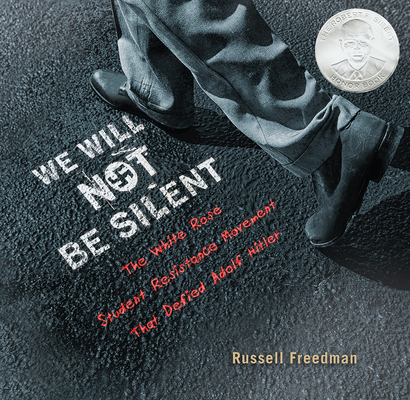 "Among the wealth of good Holocaust literature available, Freedman's volume stands out for its focus and concision, effectively placing the White Rose in its historical context, telling the story of Nazi Germany without losing the focus on the White Rose, and doing so in just over 100 pages." (Kirkus starred review)

In his signature eloquent prose, backed up by thorough research, Newbery medalist and nonfiction master Russell Freedman tells the story of Austrian-born Hans Scholl and his sister Sophie. They belonged to Hitler Youth as young children, but began to doubt the Nazi regime.

As older students, the Scholls and a few friends formed the White Rose, a campaign of active resistance to Hitler and the Nazis. Risking imprisonment or even execution, the White Rose members distributed leaflets urging Germans to defy the Nazi government.

Their belief that freedom was worth dying for will inspire young readers to stand up for what they believe in. Archival photographs and prints, source notes, bibliography, index.

Russell Freedman (1929-2018) received the Newbery Medal for Lincoln: A Photobiography. He was the recipient of three Newbery Honors, a National Humanities Medal, the Sibert Medal, the Orbis Pictus Award, and the Laura Ingalls Wilder Award, and was selected to give the 2006 May Hill Arbuthnot Honor Lecture. Mr. Freedman lived in New York City and traveled widely to research his books.

"As always, Freedman not only writes with clarity and pace but augments his text with primary-source quotes and photographs that add power and immediacy." — Horn Book Magazine