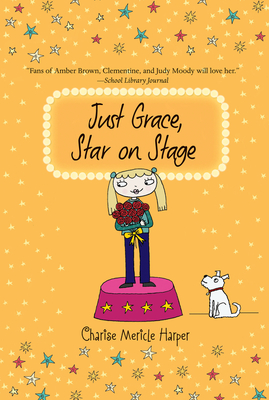 By Charise Mericle Harper
$6.99
Available from Crow via Warehouse. Usually Ships in 1-3 Days

This is book number 9 in the The Just Grace Series series.

In a starred review, Booklist called the Just Grace series “hilarious” and said, “Give this to . . . anyone looking for a funny book.” Grace is a curious and well-meaning third-grader who occasionally gets into a little bit of trouble. This time, her class is putting on a play, and Grace is determined to be the star! But things don’t work out quite like she planned, and Marta gets the role. Grace is jealous at first, but soon realizes there’s more than one way to shine on stage. This is an act that fans of Judy Moody and Clementine surely won’t want to miss!

Charise Mericle Harper is the author and illustrator of many books for children, including the Just Grace series and the Next Best Junior Chef series. Charise lives in Oregon. Visit Charise at chariseharper.com and on Twitter at @ChariseHarper.