Shipwrecked!: The True Adventures of a Japanese Boy (Paperback) 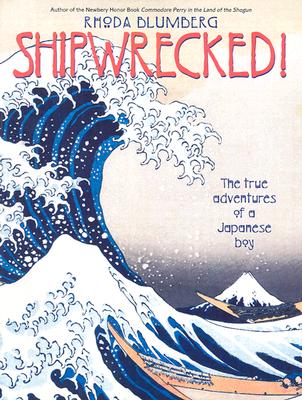 Any person who leaves
the country to go to another
and later returns
will be put to death.

This was the law in Japan in the early 1800s. When fourteen-year-old Manjiro, working on a fishing boat to help support his family, was shipwrecked three hundred miles away from his homeland, he was heartbroken to think that he would never again be able to go home. So when an American whaling boat rescued him, Manjiro decided to do what no other Japanese person had ever done: He went to America, where he received an education and took part in events that eventually made him a hero in the Land of the Rising Sun.

Rhoda Blumberg has written about the opening of Japan (1853-1854) in Commodore Perry in the Land of the Shogun, a Newbery Honor Book, which also won the Boston Globe/Horn Book Award and the Golden Kite Award. Her acclaimed histories also include The Incredible Journey of Lewis & Clark, The Great American Gold Rush, and The Remarkable Voyages of Captain Cook, all ALA Notable Books. She is the winner of the Washington Post/Children's Book Guild Award for her overall contribution to nonfiction.

Rhoda Blumberg says that while doing research for Commodore Perry, "I read about the ordeals and strange adventures of Manjiro, then spent years replaying his life story in my mind until I felt impelled to write about him."

The author and her husband, Gerald, live in Yorktown Heights, New York.