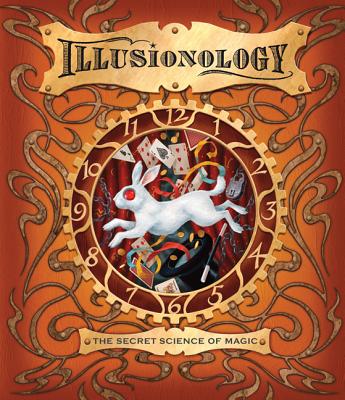 Can you trust your eyes? This discovery in the ‘Ology series amazes and thrills as the closely guarded secrets of the illusionologists are revealed!

Do you wonder how Harry Houdini performed his amazing escapes? Are you burning to learn the art of making a beautiful woman appear to levitate? Look closely, for the secrets of the world's most famous magicians and illusionists — from the ancient Egyptians through the early twentieth century “Handcuff King” himself — are contained within! More than a fascinating history of magic through the ages, Illusionology is an indispensable guide unveiling step-by-step instructions for more than twenty-five astonishing feats. Master the classic cups-and-ball illusion! Mesmerize your friends with mindreading card tricks! Along with sundry flaps and booklets, readers will find props for their own sleight of hand, including:
— A magical “dematerializer”
— A set of trick playing cards
— A pair of “disappearing spot” paddles
— A “levitating” card!

ILLUSIONOLOGY includes a visually dense array of interactive elements: flaps, 3D pop-ups, foldouts, sealed envelopes. Among its revelations: the secrets behind Harry Houdini’s straitjacket escape and needle swallowing tricks, the “science” of levitation and the trickery behind spirit mediums. But watch out: readers also learn dice and card tricks that require no special extrasensory ability.
—The New York Times

Purportedly written by magician Albert D. Schafer, who vanished in 1915, this handsome addition to the Ologies series, which mimics the look of advertisements and periodicals of the era, explores the history and practice of magic...Step-by-step directions and props let readers try simple tricks, while clues lead to the revelation of the author’s fate.
—Publishers Weekly

A beguiling mix of wonders and practical advice.
—Kirkus Reviews

With a holographic, steampunk style cover and pages of secrets and lore hidden under flaps and inside envelopes, Illusionology holds the promise of hours of entertainment for middle graders on up.
—Omnivoracious (Amazon blog)