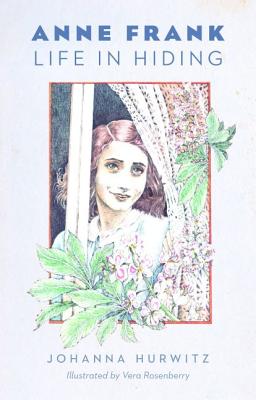 For ages 8 and up

Anne Frank loved to play tennis and swim. She enjoyed being with her friends in school and couldn’t resist chattering during class. But, tragically, Anne was growing up in Holland during the Second World War, when all European Jews lived in grave danger. When Dutch Jews were forced to leave their homes, Anne and her family found a hiding place.

Anne kept a diary in which she described the two years of their secret life. After the war ended, the diary was found and published. Her innocent account of the horrors of war was widely read, and it touched readers all over the world. This biography tells about Anne’s family and their lives before the Second World War, the Nazi persecution of Jews, and Anne’s years in hiding.
Johanna Hurwitz’s readable, direct style enables young readers to share Anne’s childhood dreams and to feel the tension of the years that followed. The realistic black-and-white drawings by Vera Rosenberry bring Anne Frank even closer to readers’ hearts.

Johanna Hurwitz is the author of Leonard Bernstein: A Passion for Music, as well as many books of fiction for young readers. Her book The Hot and Cold Summer won the Texas Bluebonnet Award and the Wyoming Indian Paintbrush Award. Vera Rosenberry is the author and illustrator of several children’s books, including When Vera Was Sick, Vera Goes to the Dentist, Vera Rides a Bike, and Vera’s New School.

“A first choice among the in-print biographies of Anne Frank for younger readers, and should lead its readers to read her Diary.”—School Library Journal