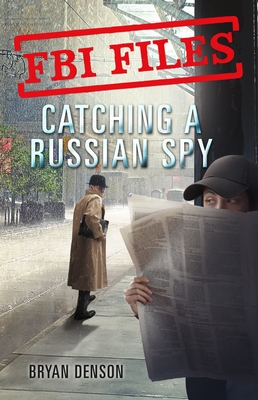 This is book number 2 in the FBI Files series.

Catching a Russian Spy is the story of the FBI's investigation of Aldrich Ames, CIA agent who turned Russian spy, and the agent who helped bring him to justice.
Aldrich H. "Rick" Ames was a 31-year veteran of the CIA. He was also a Russian spy. By the time Ames was arrested in 1994, he had betrayed the identities of dozens and caused the deaths of ten agents. The notorious KGB (and later the Russian intelligence service, SVR) paid him millions of dollars.

Agent Leslie G. “Les” Wiser, Jr. ran the FBI's Nightmover investigation tasked with uncovering a mole in the CIA. The team worked night and day to collect evidence—sneaking into Ames' home, hiding a homing beacon in his Jaguar, and installing a video camera above his desk. But the spy kept one step ahead, even after agents followed him to Bogota, Colombia. In a crazy twist, the FBI would score its biggest clue from inside Ames' garbage can.

At the time of his arrest on February 21, 1994, he had compromised more highly-classified CIA assets than any other agent in history.

Go behind the scences of some of the FBI's most interesting cases in award-winning journalist Bryan Denson's FBI Files series, featuring the investigations of the Unabomber, al-Qaeda member Mohamed Mohamud, and Michael Young's diamong theft ring. Each book includes photographs, a glossary, a note from the author, and other detailed backmatter on the subject of the investigation.

Bryan Denson is an award-winning journalist and the author of The Spy’s Son. He was a finalist for the Pulitzer Prize in national reporting, and contributes stories to Newsweek and serves as a special correspondent for the Los Angeles Times. FBI Files is Bryan’s first series for young readers. He lives in Portland, Oregon.

Praise for The Unabomber: Agent Kathy Puckett and the Hunt for a Serial Bomber
"This page-turning true-crime narrative takes readers behind the scenes of the detailed work, decision-making, and sometimes luck that go into solving difficult cases. The writing is lively, and the principal players are fully dimensional." - Kirkus

"Denson's well-written, well-researched book engages readers from the beginning and builds suspense as the case hits dead-ends again and again. His lengthy interviews...supply important background and insight into how they solved the case, grounding this true-crime account firmly in facts." - Booklist

"Denson’s text delivers true-crime thrills generally reserved for older readers but packaged here in streamlined content and accessible text, laced with a well-chosen selection of photographs and document reproductions." - The Bulletin of the Center for Children's Books

"The text, pacing, and topic are accessible to reluctant readers, and the back matter features a wide array of resources and additional reading... An enthralling, well-researched introduction to true crime for upper elementary/middle school readers." - School Library Journal