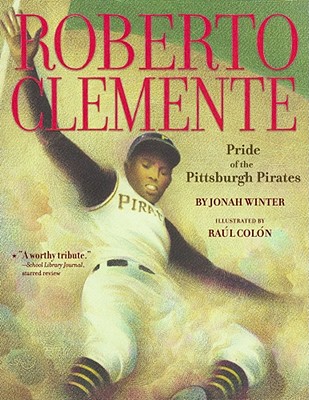 On an island called Puerto Rico, there lived a little boy who wanted only to play baseball. Although he had no money, Roberto Clemente practiced and practiced until—eventually—he made it to the Major Leagues. As a right-fielder for the Pittsburgh Pirates, he fought tough opponents—and even tougher racism—but with his unreal catches and swift feet, he earned his nickname, "The Great One." He led the Pirates to two World Series, hit three-thousand hits, and was the first Latino to be inducted into the Hall of Fame. But it wasn't just baseball that made Clemente legendary—he was was also a humanitarian dedicated to improving the lives of others.

Jonah Winter is the award-winning author of more than forty nonfiction picture books that promote environmental awareness and social and racial justice. Among them are The Snow Man; The Little Owl & the Big Tree: A Christmas Story; Oil; The Secret Project; Ruth Bader Ginsburg: The Case of R.B.G. vs. Inequality; My Name is James Madison Hemings; Barack; The Founding Fathers!; and Lillian’s Right to Vote, a Jane Addams Children’s Book Award recipient and Kirkus Prize finalist.

Raúl Colón has illustrated several highly acclaimed picture books including the New York Times bestselling Angela and the Baby Jesus by Frank McCourt and Susanna Reich’s José! Born to Dance, which received a starred review in Booklist. Mr. Colón lived in Puerto Rico as a young boy and now resides in New City, New York, with his family.