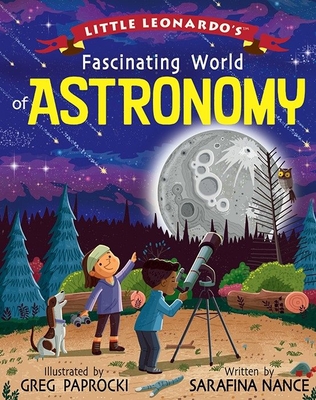 Companion book to the Little Leonardo Fascinating World of series featuring basic concepts about what astronomers do and all things space.

Join author Sarafina Nance, a real-life astrophysicist and one of Forbes magazine "30 inspirational women," as she guides you through 22 fascinating pages of fun facts all about the universe. Get lost in captivating illustrations and text about that big wide-open space above us. Did you know that everything you can see, touch, taste, and smell is actually just a teeny tiny part of the Universe? Or that even though Earth has only 1 moon, Jupiter has 79 and Saturn has 82? Or did you know that there is a planet that's made of diamond? Little Leonardo's Fascinating World of Astronomy joins the Little Leonardo Fascinating World of series, illustrated by Greg Paprocki.

Companion book to the Little Leonardo Fascinating World of series featuring basic concepts about what astronomers do and all things space.

Sarafina Nance is an astrophysicist, advocate, writer, speaker, and science communicator whose work has been featured in the BBC, National Geographic, SF Chronicle, Refinery29, and elsewhere. She has published three academic papers in both the Monthly Notices of the Royal Astronomical Society and The Astrophysical Journal. She has also discussed astronomy on NPR's Short Wave, has just been selected as one of Arab America's 40 under 40 and one of Forbes' 30 Interesting Women, and hosts an astronomy show called Constellations to an audience of nearly 5 million. She lives in Berkeley, California with her partner and her dog, Comet.Greg Paprocki works full-time as an illustrator and book designer. He has illustrated several Curious George books, as well as previous books in the Little Leonardo series, the BabyLit alphabet book series, the new Count and Find primer series, and The Big Book of Superheroes for Gibbs Smith. His Gibbs Smith titles have sold over 463,788 copies. He lives in Omaha, NE.