Whisky Japan: The Essential Guide to the World's Most Exotic Whisky (Hardcover) 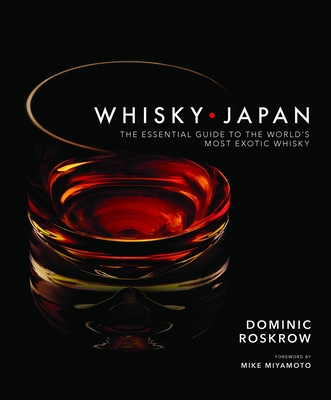 By Dominic Roskrow
$34.95
Available from Crow via Warehouse. Usually Ships in 2-5 Days


Japanese whisky is finally getting the international recognition it deserves. Originally created to emulate the malts of Scotland, Japanese whiskies now hold a distinct and unique place among other world-class spirits. Yet, despite having a history going back nearly a century, and winning many prestigious awards in recent years (including Whisky Magazine’s World Whiskies Awards in 2016, 2013, 2011, and 2010, and The Whisky Bible’s World Whisky of the Year in 2013), Japanese whiskies have remained enigmatic and exotic.


UntiI now. In WHISKY JAPAN, the most comprehensive book on Japanese whisky ever available in English, renowned expert Dominic Roskrow reveals what makes Japanese whisky so special and sought-after by whisky connoisseurs everywhere. He introduces the companies that make Japanese whisky, and offers detailed portraits of these distilleries, explaining their complex production processes, traditions, and the new innovations that have allowed them to take on and surpass the competition. The reader is carried along on a journey to the very heart of Japanese whisky making, with extensive tasting notes for all the leading expressions, a special selection of rare Japanese treasures, profile interviews with key personalities, and over 500 beautiful photographs and illustrations. Here are the whisky makers, blenders, independent bottlers, retailers, collectors, bloggers, and bartenders. There is a lively guide to the best bars around the world in which to taste Japanese whisky, a section on whisky cocktails and food pairings, and useful travel tips on how to get to the distilleries, where to stay, what to eat, and what else there is to do in the area.

Dominic Roskrow is an award-winning drinks writer and the former editor of Whisky Magazine, The Spirits Business and Whiskeria. He has written eight books on whisky including The World’s Best Whiskies, 1001 Whiskies You Must Taste Before You Die and The Whisky Opus (for which he was nominated for the 2013 Fortnum & Mason Drinks Writer of the Year award), and has contributed to several more, including every edition of The Whisky Yearbook. He specializes in world whisky and whisky from non-traditional whisky-making regions. In 2007 he received the Scotch whisky industry’s highest honor when he was made a Keeper of the Quaich, and in 2010 he was made a Kentucky Colonel, Kentucky’s highest award.

"Highly acclaimed for its quality, whisky from Japan is one of the most sought after liquors in the global drink market, today. ‘Whisky Japan,’ a new book from Kodansha, demystifies how the craze emerged by further digging into history, production, marketing, and development of Japanese whisky as well as how to enjoy it." – Chopsticks NY

"It’s a great read! I’m so glad there’s a book devoted to Japanese whisky. My hope is that people pick it up to educate themselves, especially in this culture where whisky fans want to know more." – Adventures in Whiskey

"Bartenders and guests can’t seem to get enough of Japanese whisky; and it doesn’t hurt that the spirit has a touch of mystery to it. Letting you in on the secret, this informational read will teach you about its process, its distilleries, its traditions, its history and its future, along with practical tidbits, like the best bars to find Japanese whisky, how to pair it with food and how to use it in a cocktail." – The Tasting Panel

"Whisky Japan by Dominic Roskrow is a fascinating look into the malt whiskies of Japan. . . . The immersive coffee-table-book-size tome transports us to the perfectionist distilleries of Japan, making malted whiskies similar to Scotch. But don’t make the mistake of thinking these complex spirits are mere copies of the internationally recognized Scottish whisky. Instead, Roskrow writes, ‘Japanese whisky has taken a Scottish blueprint and quite deliberately tweaked it to suit a Japanese palate.’ The book helpfully provides information on Japanese-centric bars around the world, including the U.S., where you’ll be able to find a hearty selection of bottles. . . . " – Austin American-Statesman

"Dominic Roskrow’s book comes to us as a milestone in the history of Japanese whisky appreciation! Well-informed, beautifully-designed and loaded with crucial practical information, it is a must-have for the whisky connoisseur and the younger drinker alike." – Flavien Desoblin, owner of Copper & Oak and The Brandy Library, NYC

"If you are a whisky aficionado then the new book by English writer Dominic Roskrow called "Whisky Japan" should be on your Xmas stocking list. This is an impressive 288-page book that tells the story of how a spirit of no interest or value to whisky drinkers Is now the most sought-after in the industry. . . . The pictures and graphics are stunning. . . . detailed information on each whisky is thorough. . . it just makes you wat to go out and try some of them at a whisky bar.. . . a must-buy." --Spiritsman

"Veteran whisky writer Dominic Roskrow has written one of the most extensive books on Japanese whisky yet with Whisky Japan. . . ." – WhiskyCast Holiday Gift Guide

"This beautifully photographed book gives an inspiring glimpse into the world of Japanese whisky-making. . . . If you’re hoping to lose yourself in fantasies of a grand tour of every distillery in Japan, daydream about visiting the world’s best Japanese whisky bars, or just enjoy some gorgeous images of some of Japan’s most scenic locations, you’ll be happy. . . . The most valuable sections of the book are the interviews with master blenders, distillers, distillery operators, bartenders, writers, and other industry insiders sprinkled throughout." – The Whiskey Wash

"An open mind on the subject of whisky is rewarded with myriad pleasures, and this "Essential Guide to the World’s Most Exotic Whisky" details a century-old history of making brown spirits right up to the present, when distillers have created cult whiskies. . . . Dominic Roskrow has long experience as an award-winning spirits journalist, and the illustrations, paper stock and presentation are all complementary to the whiskies themselves." – John Mariani’s Virtual Gourmet

"This book details the whiskies and their culture, profiles key distilleries and their masters, gives you a list of all the great bars around the world to drink Japanese whisky and even provides some excellent cocktail recipes to make with it. It’s an essential read (with gorgeous photos too). . . ." – The Alcohol Professor

". . . a masterpiece, which should be in all spirits and wine libraries around the world." – Edouard Cointreau, President of the Jury – Gourmand World Cookbook Awards

"There is such a cornucopia of information, interesting insights, places to put on your "To Do" list, it is simply a delight to pick up the book and randomly read what it opens to. I continue to do this and find it difficult to not turn to the next page and then on to the next page again and again." – Paul Rest, Your Home with Karie Engel