Boozehound: On the Trail of the Rare, the Obscure, and the Overrated in Spirits [A Travel and Cocktail Recipe Book] (Hardcover) 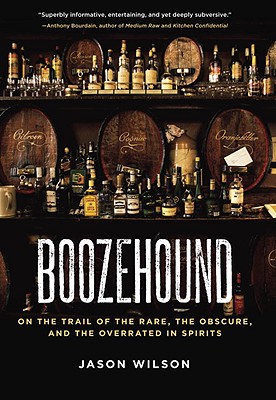 While some may wonder, “Does the world really need another flavored vodka?” no one answers this question quite so memorably as spirits writer and raconteur Jason Wilson does in Boozehound. (By the way, the short answer is no.) A unique blend of travelogue, spirits history, and recipe collection, Boozehound explores the origins of what we drink and the often surprising reasons behind our choices.

In lieu of odorless, colorless, tasteless spirits, Wilson champions Old World liquors with hard-to-define flavors—a bitter and complex Italian amari, or the ancient, aromatic herbs of Chartreuse, as well as distinctive New World offerings like lively Peruvian pisco. With an eye for adventure, Wilson seeks out visceral experiences at the source of production—visiting fields of spiky agave in Jalisco, entering the heavily and reverently-guarded Jägermeister herb room in Wolfenbüttel, and journeying to the French Alps to determine if mustachioed men in berets really handpick blossoms to make elderflower liqueur.

In addition, Boozehound offers more than fifty drink recipes, from three riffs on the Manhattan to cocktail-geek favorites like the Aviation and the Last Word. These recipes are presented alongside a host of opinionated essays that cherish the rare, uncover the obscure, dethrone the overrated, and unravel the mysteries of taste, trends, and terroir. Through his far-flung, intrepid traveling and tasting, Wilson shows us that perhaps nothing else as entwined with the history of human culture is quite as much fun as booze.

JASON WILSON writes the spirits column for the Washington Post. His column has twice won an award for Best Newspaper Food Column from the Association of Food Journalists. Wilson is also the series editor of the annual anthology The Best American Travel Writing and is the editor of TheSmartSet.com. Wilson's work has appeared in many magazines and newspapers, including National Geographic Traveler, Travel + Leisure, the Boston Globe, and the Washington Post's Sunday magazine. He previously served as the restaurant critic at Philadelphia Magazine. He teaches writing at Drexel University. Visit www.jasonwilson.com.

“A longtime travel writer, currently a spirits columnist for the Washington Post, Wilson's book is part pithy memoir of a sambuca-soaked kid-turned-haute-liquor-pro, part homage to the beauty of odd bottles, part social commentary, and part irreverent travelogue that's at its most engaging when Wilson is on the road.”
—Philadelphia Inquirer, 12/16/10

“With recipes for all sort of cocktails and libations, plus lots of highly-opinionated rants and raves (and a few pot-shots at the big guys, like the €30 cocktails at the Ritz in Paris that use bottled juice, not fresh) it’s not as much fun as sitting with Jason around a table of spirits, ready to be sampled. But until we meet again, this book is the next best thing.”
—DavidLebovitz.com, Favorite Cookbooks of 2010, 12/6/10

“It's like reading a food memoir but with drink as the backdrop and instigator. . . .There is education here, certainly, but via a pleasurable, relaxing read. Like a fine drink, at its finish, I found myself thirsty for more.”
—San Francisco Bay Guardian, Appetite: Delicious giving, 12/3/10

“A smart globe-hopping tour behind the scenes of the current ‘cocktail revolution.’”
—The Week, 11/12/10

“The Washington Post's spirits columnist since 2007, Mr. Wilson has never been one for 100−point scales and tasting notes. For him the best drinks are trips down memory lane. . . The wit and judgment that mark Mr. Wilson's column are evident throughout Boozehound, his journey through the modern spirits market. He has had the good fortune to be on the beat as the classic cocktail revival led to the reappearance of long−missing liquors, drinks, and ingredients. In nine chapters, covering everything from artisanal bitters from Italy to how to make a Fizz fizz, he celebrates the new abundance while remaining skeptical about liquor conglomerates' marketing schemes. . . . Throughout his bibulous wanderings, Mr. Wilson never loses sight of the drink in the glass.”
—Wall Street Journal, 10/23/10

“Wilson may just be the best virtual drinking buddy you’ve ever had, as he mixes his insights with hilarious war stories. . . .Whether he’s detailing happy hour in Milan, the annual ‘Tales of the Cocktail’ convention, or Peru’s glass-sharing tradition, one thing’s for sure: this book will make you want to drink—and drink something interesting. . . Let’s hope there’s another round coming soon.”
—Ward Sutton, Drawn to Read, BarnesandNobleReview.com, 10/17/10

“Call him the Sherlock of scotch, the Poirot of pisco or the Marlowe of malt whiskey.”
—Washington Post Express, 10/13/10

"The book is entertaining, and the info is accompanied by a healthy chaser of acerbic wit and plenty of personal asides."
—Liquor.com, 10/12/10

"Entertaining, thoroughly engaging, and utterly informative. . . . In the end, Boozehound is not just a book for drinkers. Rather, it’s an invaluable volume for curious people everywhere, and its insights into culture, history, travel, and, yes, spirits, are rewarding on any number of levels. They’ll also make you seriously thirsty for a cocktail--with a renewed sense of appreciation for what went into it, of course."
—Uncork Life!, 10/11/10

"A breezy, archly opinionated picaresque from the world of tippling, on the order of a milder-mannered Anthony Bourdain."
—Dallas Morning News, 10/4/10

"Wilson got his sea legs as a travel writer so Boozehound dips hard into travelogue. Here, though, it's a crucial means of moving liquor beyond recipes to the realm of geography and personality. Recipes are there, of course. But Wilson's real fodder is the fabric of the cocktail revolution."
—San Francisco Chronicle, 10/3/10

"[Wilson] does an outstanding job of conjuring the images of time, place, and sensation that are so vital to the appreciation of any fine food or drink."
—The A.V. Club, 9/30/10

"Wilson not only has the rare opportunity to write about spirits on such a frequent basis, but he also has a true enthusiasm and affinity for the topic, which shows in the vibrancy of his writing. Boozehound takes Wilson's Post columns several steps further, creating for the reader a more comprehensive view of today's dynamic world of drinkables.I've enjoyed reading Wilson's columns for several years now, and Boozehound is a fantastic read as well."
—Paul Clarke, Serious Eats, 9/29/10

"A new combo travelogue/industry commentary/drink recipe collection addressing all that matters in the world of fine spirits."
—Philadelphia City Paper, 9/28/10

“This high spirited book is sure to quench your thirst for knowledge and fun.”
—Los Angeles Daily News, 9/21/10

"Wilson's rich descriptions will entice readers to try something new the next time they hop on a bar stool."
—Library Journal, 9/15/10

"If Post spirits writer Jason Wilson has any mission with his forthcoming book, Boozehound, it’s to inject some intellectual rigor into a form of journalism too often drunk on its own superficial prose."
—Washington City Paper, Young and Hungry Blog, 9/15/10

"Jason Wilson, the spirits columnist for The Washington Post, is funny, smart, and just irreverent and critical enough that you trust every word he writes. And he likes the sauce? Sounds like our kind of writer."
—Eater.com, 8/30/10

"In his first book, Wilson, the spirits columnist for the Washington Post, has concocted an idiosyncratic exploration of the world of spirits. His primary ingredients include heavy doses of cocktail recipes, travelogues, history lessons, polemics against popular trends (flavored vodka is his primary target), all mixed together with a dash of autobiography. Wilson's bibulous quest takes him across Europe and the Americas, where he quaffs everything from Genever and Calvados to añejo tequilas and a substance called "Peanut Lolita." As he drinks his way around the world, Wilson also examines the myriad ways in which alcohol has shaped culture and his own suburban New Jersey upbringing. Wilson sees the American obsession with flavored vodka as part of the long hangover from Prohibition. Yet he also discerns a growing American interest in more complex spirits, and he makes it his mission to introduce readers to the delights of arcane substances like Chartreuse and Tuaca. Wilson succeeds in his pose as an American everyman abroad...Yet he has done his readers a real service: with cocktail recipes at the end of each chapter, Boozehound serves as a smooth personalized guide to classy mixology. (Oct.)"
—Publishers Weekly, 6/28/10

“There’s nobody I’d rather read on the subject of booze than Jason Wilson. Smart, funny, illuminating, and opinionated, this is a book I’ll return to often—both when I need a good read, and when I need a good drink.”
—Molly Wizenberg, creator of Orangette and author of A Homemade Life

“Boozehound takes you behind the labels and delves deeply—and humorously—into the world of liquors and libations. I’ve had the pleasure to sip, swirl, and savor a cocktail (or two) with Jason Wilson, and with this collection of highly spirited stories and recipes, you can too.”
—David Lebovitz, author of Ready for Dessert and The Sweet Life in Paris

“Jason Wilson’s overworked liver is a national treasure. A deeply entertaining guide to the periodic table of liquors, Boozehound is a serious fount of pleasures, chief among them Wilson himself: doggedly curious, acidly opinionated, refreshingly irreverent, and epically thirsty.”
—Jonathan Miles, author of Dear American Airlines and former cocktail columnist for the New York Times