The Unofficial Magnus Chase and the Gods of Asgard Companion: The Norse Heroes, Monsters and Myths Behind the Hit Series (Paperback) 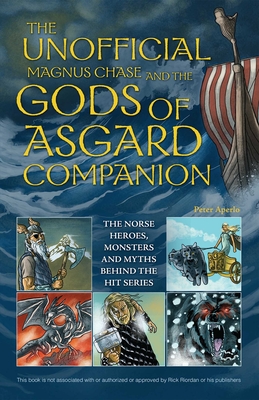 FASCINATING BACKGROUND FACTS, STORIES AND MYTHOLOGICAL INFORMATION FOR THE MAGNUS CHASE AND THE GODS OF ASGARD SERIES
Long ago in the legendary land of Asgard, battles raged throughout the Heavens and Earth between powerful gods, Viking heroes and deadly monsters. These timeless tales of bravery, deceit and love come alive in this all-new illustrated guide.
As enthralling today as when first told around arctic campfires, these ancient myths are the inspiration for Rick Riordan’s captivating new Magnus Chase books. An ideal source of Norse mythology for anyone reading his novels, this handy companion includes information on:
•Odin: King of the gods
•Asgard: Realm of the gods
•Fenrir: A blood-thirsty giant wolf
•Loki: The trickster god
•Fafnir: A treasure-hoarding dragon
•Valhalla: Heaven’s golden hall
•Freyja: Goddess of love
•Ragnarok: Battle of the doomed gods

IMPORTANT NOTE TO READERS: This book is an independent and unauthorized fan publication. No endorsement or sponsorship by or affiliation with Rick Riordan, his publishers, or other copyright and trademark holders is claimed or suggested. All references in this book to copyrighted or trademarked characters and other elements of books by Rick Riordan are for the purpose of commentary, criticism, analysis, and literary discussion only.

Peter was a naval officer and published author in Scandinavian archaeology before he turned to writing for video games and movies. He scripted the console video games Watchmen: The End is Nigh (Parts 1 and 2) and The Legend of the Guardians: The Owls of Ga’Hoole. He also penned the books Watchmen: The Art of the Film, Watchmen: The Official Film Companion, Chappie: The Art of the Movie, and Batman v Superman: Dawn of Justice: The Art of the Film. A film he co-wrote, Devil’s Gate, premiered at the 2017 Tribeca Film Festival. He is currently working on a Norse mythology animated series for Netflix. He lives in southern California with his wife and two daughters.