Boston History for Kids: From Red Coats to Red Sox, with 21 Activities (For Kids series #67) (Paperback) 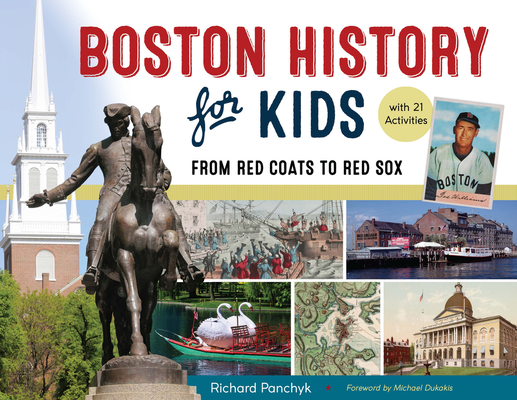 By Richard Panchyk, Michael Dukakis (Foreword by)
$16.99
Email or call for price.

This is book number 67 in the For Kids series series.

Few American cities are as steeped in history as Boston. Starting with its Native American and Puritan roots, through its pivotal role in the Revolutionary War and its many contributions to art and literature, Boston has earned its reputation as a modern, cultural metropolis. This mix of old and new makes Boston a fascinating place to learn about and explore.

Boston History for Kids spans 400 years of history, covering many of the major events that have occurred, from witch hunts to an unexpected earthquake, from the Tea Party to the Great Fire, from the Civil War to the Boston Marathon attack. Author Richard Panchyk chronicles the lives of Bostonians both famous and infamous—and many colorful characters that readers may not yet know.

This lively history also includes a time line, a list of online resources, and 21 engaging hands-on activities to better appreciate this Massachusetts city. Kids will:

Richard Panchyk is the author of New York City History for Kids, Baseball History for Kids, and World War II for Kids. Michael Dukakis served three terms as governor of Massachusetts and was the 1988 Democratic nominee for president.

"A very special, historical experience for students, absorbing them with imaginative, hands on activities as they learn about the realities of boisterous Boston and its large slice of American history. You don't have to be a Red Sox fan to love this gripping and illustrative narrative of real life. Better than any tourist booklet, Boston History for Kids, by Richard Panchyk, will entice you to visit Bean Town and its memorable allures" - Ralph Nader