Pedro's Yo-Yos: How a Filipino Immigrant Came to America and Changed the World of Toys (Hardcover) 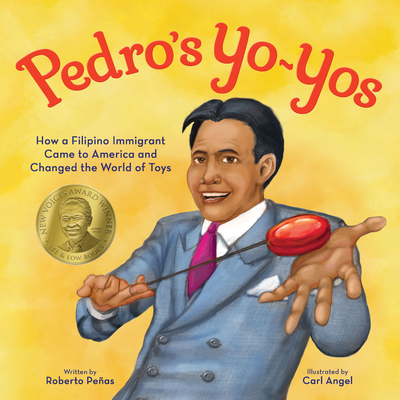 By Roberto Peñas, Carl Angel (Illustrator)
$19.95
Unavailable
Not Yet Published

Discover the rags-to-riches backstory of one of America's favorite toys, the yo-yo, in this colorful biography of businessman Pedro Flores.

It can spin and roll, leap and twirl. You can stretch it between your hands or swing it between your legs. The tricks you can do with one are nearly endless. No wonder the yo-yo is one of the most successful toys ever made And its popularity began with a Filipino immigrant seeking a better life in the US.

Pedro Flores was born in the Philippines in 1896, when Spain still ruled his country. After the US took over, Pedro traveled to California, received an education, and looked for ways to go into business for himself. Then he remembered a toy from his childhood called the yo-yo, which means "come back" in Tagalog. With a couple blocks of wood and a little string, Pedro created his first model yo-yo and practiced tricks to show it off.

It was an instant hit When children saw the yo-yo in action, they clamored to get one themselves. So Pedro always performed his tricks near movie theaters, outside candy shops--anywhere he knew children would see the toy. Soon he was hiring fellow Filipinos to advertise it for him, while he ran factories that manufactured more than a million yo-yos a week But Pedro's success didn't stop there, as the yo-yo developed into a pastime that's popular even today, while Pedro himself pursued what truly mattered to him. Pedro's Yo-Yos is the lively story of one immigrant's ups and downs on the way to his American dream.