Hilde on the Record: Memoir of a Kid Crime Reporter (Hardcover) 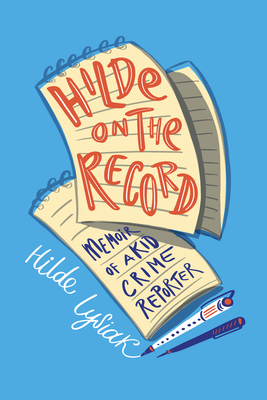 When seven-year-old Hilde Lysiak found out her new town didn’t have a paper, she grabbed a notepad and began to work.

Hilde Lysiak spent her early childhood in New York City with a passion for journalism. When her family moved to Selinsgrove, Pennsylvania, Hilde didn’t complain. Instead, she started reporting.

Hilde began by reporting on the birth of her sister, the newest resident on Orange Street, then began expanding her coverage to the entire city. She interviewed hundreds of locals in her effort to deliver “All the News Fit for Orange Street”: a seed exchange at the local library, a fundraiser for a hospital’s neonatal unit, a fire at a church, and a mysterious vandal destroying landscaping on city property.

Everything changed when Hilde received a tip that a terrible crime had happened just blocks from her house. By using the tools she had learned on the beat, the enterprising young reporter was able to confirm the facts and get the important information out to the public several hours before the other local media.

Hilde was proud of her work, but not everyone in her small town felt that way. Cyberbullies targeted her, zeroing in on her age and gender. Hilde considered ignoring them but decided she had to stand up to the haters to protect the reputation she had worked so hard to earn. Her response went viral, and nearly every major news organization took notice.

Hilde hasn’t let anything stand in her way since.

Hilde Lysiak is the founder of the Orange Street News. The paper has had nearly a thousand paid subscribers and has been read by millions more online. Hilde's journalism has been profiled by the New York Times, Columbia Journalism Review, NBC Today, the Washington Post, and many other newspapers and television stations around the world. She lives in Patagonia, Arizona.

"Hilde on the Record is a poignant coming-of-age story about a young person finding her voice and discovering what is most meaningful in her life.” —Ellen Mahoney, author of Nellie Bly and Investigative Journalism for Kids

“A unique memoir written from a teen for tweens. Middle-grade 'girl reporter' Hilde Lysiak hit her small-town streets getting stories for her own newspaper. Lysiak delivers a solid account of how she did basic journalism and learned to demand her First Amendment rights. As meaningful for readers is following Hilde’s growing awareness of how to understand herself. I’m looking forward to Hilde’s next installment!” —Kerrie Logan Hollihan, author of Reporting Under Fire

“Hilde inspires us all. This book is as wise, fun, and enlightening as she is!” —Brooklynn Prince, of The Florida Project and Home Before Dark

"Lysiak’s years of writing experience come through in this conversational account. Readers will find plenty to admire in Lysiak’s determination, her love and respect for her family, and the freedom that her parents have given her to pursue her passions." — Kirkus Reviews

"[Hilde] weaves in valuable instruction on the journalism craft, the importance of a free press, and how kids can more broadly plunge into the world around them and take action. But most impressive in these pages is Hilde's courage to open up about her more private personal struggles over the years. These revelations of vulnerability give the book its heart and are likely to expand its readership beyond aspiring journalists." — The New York Times

"Lysiak…pens an astonishing memoir that details her transition from early childhood to local preteen reporter and beyond." — Publishers Weekly

“Young readers will instantly like Lysiak and come to respect her love for the press as well as the responsibilities that come with reporting. An insightful, solid read for middle school." — School Library Journal

"Of special and particular interest to young readers interested in journalism and with the subject of dealing with bullies." — Midwest Book Review

“Young teens with journalistic ambitions could learn a lot from her.” — Redeemed Reader