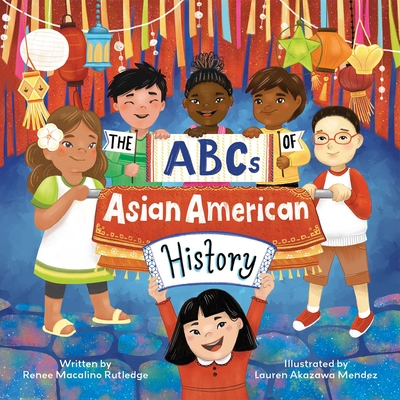 Celebrate and learn about the many cultures that fall under the Asian American umbrella in this alphabetically organized, rhyming, and colorfully illustrated picture book for kids!

Perfect for kids ages five and up, this book explores Asian Americans in the US cultural landscape, from the first Asian American to win an Olympic gold medal to the first Indian American woman to travel to space, as well as the names of famous Asian American inventors, artists, and political leaders. Kids will also learn about traditions, from Diwali to Chinese New Year; music and fashion styles, from the tabla to the sari; and signature dishes, like laksa and pho, giving greater visibility to Asian Americans for the youngest of learners.

A much-needed addition to the classroom, home library, or gift bag, The ABCs of Asian American History will inspire important conversations, offer a tool for inclusivity in early learning, and encourage anyone reading to be a changemaker in their own right.

Renee Macalino Rutledge was born in Manila, Philippines, and raised in California from the age of four. Her debut novel, The Hour of Daydreams, won an Institute for Immigration Research New American Voices Finalist award, Foreword INDIES Gold, and Powell's Top Five Staff Pick. In addition to The ABCs of Asian American History, she is also the author of the children’s books One Hundred Percent Me,  a celebration of mixed-race identities, and Buckley the Highland Cow & Ralphy the Goat, a story about overcoming hardship with the help of our friends, who are often very different from ourselves. Renee lives in the San Francisco Bay Area, where she reads books for a living, loves the outdoors, and is always on the lookout for new adventures with her husband and their two daughters. Find her at www.reneerutledge.com or connect with her on Instagram @renee_rutledge.

Lauren Akazawa Mendez is a fourth generation Japanese American children’s book illustrator and graphic designer living in Washington state. Born in Southern California, she received her bachelor's degree from UCLA and taught art for eight years, but has been creating since she first drew on her sister’s face at three years old. When not scribbling on something, she goes bug hunting with her little boy and husband, bakes yummy treats for friends, and stays up way too late reading fantasy novels. Visit her at www.littlelobo.com.