Stalin's Wine Cellar: Based on a True Story (Paperback) 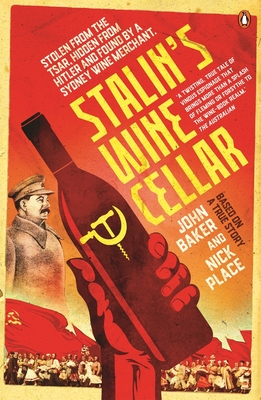 The adventure of a lifetime to buy Stalin’s secret multimillion dollar wine cellar located in Georgia; this is the Raiders of the Lost Ark of wine.

In the late 1990s, John Baker was known as a purveyor of quality rare and old wines. Always entrepreneurial and up for adventure, he was the perfect person for an occasional business partner to approach with a mysterious wine list that was foreign to anything John, or his second-in-command, Kevin Hopko, had ever come across.

The list was discovered to be a comprehensive catalogue of the wine collection of Nicholas II, the last Tsar of Russia. The wine had become the property of the state after the Russian Revolution of 1918, during which Nicholas and his entire family were executed. Now owned by Stalin, the wine was discreetly removed to a remote Georgian winery when Stalin was concerned the advancing Nazi army might overrun Russia, and inevitably loot artefacts and treasures. Half a century later, the wine was rumored to be hidden underground and off any known map.

John and Kevin embarked on an audacious, colorful, and potentially dangerous journey to Georgia to discover if the wines actually existed, if the bottles were authentic, and whether the entire collection could be bought and transported to a major London auction house for sale.

Stalin's Wine Cellar is a wild, sometimes rough ride in the glamorous world of high-end wine. From Double Bay Sydney to Tbilisi Georgia, via the streets of Paris, the vineyards of Bordeaux and iconic Château d'Yquem. A multimillion dollar cellar and a breathtaking collection of wine (and one very expensive broken bottle) is the elusive treasure. The cast of characters include Stalin, Hitler, Tsar Nicholas II, and a motley bunch of Georgian businessmen/cowboys toting handguns, in the early days of Russian business development that led to the world of Putin and oligarchs.

John Baker was a hotelier and rock ’n’ roll promoter in the eighties era of Midnight Oil, INXS, and Cold Chisel. He became a wine merchant creating a number of fine wine stores, including Quaffers Double Bay Cellars and the Newport Bottler, as well as the importing business Bordeaux Shippers. He likes wine from anywhere (as long as it’s very good) and is now more involved with a mixture of projects including the business of olive oil, as he says it’s good for his health and less punishing the next day.

"James Bond was famously au fait with the finest vintages, and it’s not hard to imagine him front and centre in this twisting, true tale of vinous espionage that brings more than a splash of Fleming or Forsythe to the wine-book realm. . . a tale heady with fear, frustration, envy, exasperation and, at one point on the streets of Paris, disaster."—The Australian

"A cracking account . . . If only more wine books were as much fun as this one." —Sunday Age

"It’s a bit of a thriller, a tale of layered intrigue, a journey through history and an intriguing insight into the verifying of label-less bottles of apparently priceless wine." —The Age/Sydney Morning Herald

"The words “wine book” and “ripping yarn” aren’t normally seen in the same sentence, but Stalin's Wine Cellar is just that." —Good Food

"The ultimate wine-meets-history tale . . . Read paired with a glass of your favourite wine." —Gourmet Traveller