New York City History for Kids: From New Amsterdam to the Big Apple with 21 Activities (For Kids series #44) (Paperback) 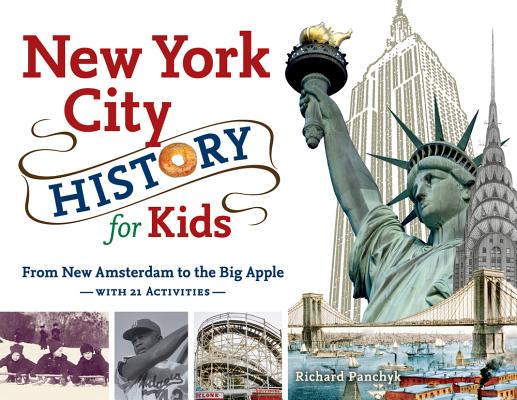 By Richard Panchyk
$18.99
Email or call for price.

This is book number 44 in the For Kids series series.

In this lively 400-year history, kids will read about Peter Stuyvesant and the enterprising Dutch colonists, follow the spirited patriots as they rebel against the British during the American Revolution, learn about the crimes of the infamous Tweed Ring, journey through the notorious Five Points slum with its tenements and street vendors, and soar to new heights with the Empire State Building and New York City’s other amazing skyscrapers. Along the way, they’ll stop at Central Park, the Brooklyn Bridge, the Statue of Liberty, and many other prominent New York landmarks. With informative and fun activities, such as painting a Dutch fireplace tile or playing a game of stickball, this valuable resource includes a time line of significant events, a list of historic sites to visit or explore online, and web resources for further study, helping young learners gain a better understanding of the Big Apple’s culture, politics, and geography.

"The main narrative is well stocked with both passages from contemporary documents and photos or other period illustrations..." — School Library Journal

"A compelling history of the city that never sleeps." — Kirkus Reviews

"I love how this book has an interactive approach to history that really allows kids to understand and explore the city."—Mom Trends

"My daughter has started reading the book and finds it fascinating to read about the city we live in." —NYC Single Mom