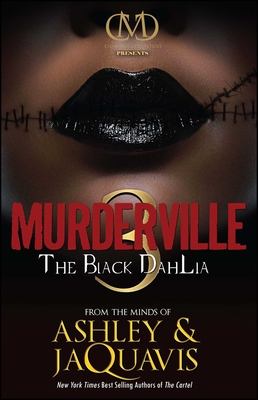 This is book number 3 in the Murderville series.

In this final installment of the Murderville series, Ashley and JaQuavis bring you the grit, treachery, and legendary street perspective that fills each of their novels.

This thrilling page-turner introduces the story of the black Dahlia and her bloodstained ascent to power. After establishing a connection with “The Five Families,” Dahlia becomes untouchable. Her brazen tactics and mafia-style antics become infamous and she is set to take over the country’s black market. But there is only one thing still standing in her way—she is a woman. Since the competition doesn’t respect her, Dahlia sets out on a bloody mission to ensure the protection of her new kingdom.

Liberty has relocated to her hometown only to get a knock on the door by a man she hasn’t seen in years. She reacquaints herself with the past and gets connected with some of the biggest bosses in the country. When fate brings her face-to-face with Dahlia, who will end up victorious? Will Dahlia’s newfound power make her invincible? Or will Liberty finally get the revenge she deserves? What happens next is the most shocking ending that Ashley and JaQuavis have ever created. This is storytelling at its greatest—welcome to Murderville 3: The Black Dahlia.

New York Times bestselling authors Ashley and JaQuavis hit the scene at the age of seventeen. Born and raised in the most notorious neighborhoods of Flint, Michigan, it was only natural for the pair to write about the street life they knew all too well. During their freshmen year in college they received national publishing deals and have since solidified themselves as two of the best in their genre.