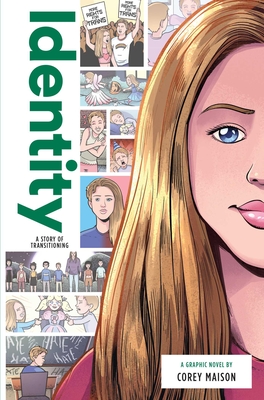 What do you do when you are born as one gender, but feel yourself to be another? Gender dysphoria affects thousands of people worldwide, but has been ignored or ridiculed in our culture. With this graphic novel, Corey Maison boldly shares her story of transitioning, so that other kids with gender dysphoria and related conditions will no longer feel so isolated, hopeless, or lost.

Corey Maison was born a girl, trapped in a boy’s body. Growing up, Corey was more interested in dolls than trucks; in dresses than jeans.  Everything about Corey was female . . . except her physicality.

Known as gender dysphoria, this condition is devastating if not acknowledged. But society is slow to be sympathetic to the idea that a person’s gender is not entirely based on physiology, but instead is fluid, and a combination of emotional and psychological self-awareness along with, or sometimes more importantly, physical characteristics.

IDENTITY tells the complex and moving tale of a young person who knows that their true gender is not the one they were assigned at birth. With unconditional love and support from her mother, Corey successfully starts the transition process with hopes of being comfortable in her own skin, being accepted by others, and raising awareness of young people who wish to transition. At 16-years-old, Corey has become a voice for other trans teens, battling bullies and helping others who are on their own individual journeys of identity.

Corey Maison is an 18-year-old from Detroit, Michigan. She currently attends an online virtual academy. She aspires to be a Victoria Secret model someday, as well as act in film and television. Corey is an LGBTQ activist and is determined to raise awareness of transgender youth.

Michelle and Anthony E. Zuiker are the Founders of Zuiker Press. The husband and wife couple develop and publish "real" stories of young people suffering from issues that affect children every day. Mrs. Zuiker is an 18-year educator from Las Vegas, Nevada. Mr. Zuiker is well known as the Creator/Executive of CSI: Crime Scene Investigation, the most popular franchise on CBS and the most successful TV show is global history.

Ahmara Smith is an award-winning Atlanta-based comic artist and illustrator. Their work has been published in Comics for Choice, Dates Anthology vol. 2, and Sweaty Palms, among others. Other than making art, they enjoy listening to music and learning new things.