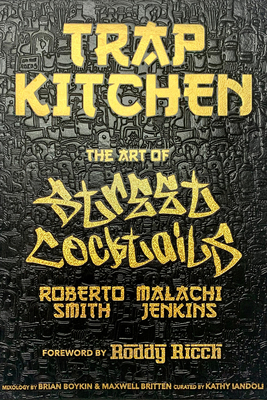 This is book number 3 in the Trap Kitchen series.

For Fans of Can I Mix You a Drink? - The Trap Kitchen franchise turns toward mixology with a comprehensive and creative guide to street cocktails, as this legendary culinary duo puts their spin on time-honored drinks on the go.

Street cocktails are alcoholic beverages sold illegally on the street, in barbershops and bodegas, and increasingly online.

It’s been four years since chefs Malachi “Spank” Jenkins and Roberto “News” Smith transformed their pop-up franchise Trap Kitchen into a book series. 2018’s Trap Kitchen: Bangin’ Recipes From Compton became a culinary favorite with 2022’s Trap Kitchen: Mac’N All Over The World proving equally as impactful. The gang members turned infamous culinary duo have had a steady rise in the cooking world and are now geared to take over mixology. TRAP KITCHEN: THE ART OF STREET COCKTAILS takes the time-honored culture of street cocktails and brings a Trap Kitchen twist, using favored libations and regional vernacular to create a one-of-a-kind experience.

The pandemic has only heightened the desire for drinks on the go, so The Art of Street Cocktails provides flavorful drinks that can be mixed, matched, and bottled, bringing the party everywhere you go. The Art of Street Cocktails includes creative mixes like the minty, rum cocktail Hulk Smash to a pineapple coconut flavored Trap Kitchen Cocktail, a nod to Trap Kitchen’s most famous pineapple chicken dish. TRAP KITCHEN: THE ART OF STREET COCKTAILS is more than just a drink guide for mobile mixology. It’s sending a strong nod to a social, urban, and regional tradition of making new mixes for the casual cocktail fan while keeping the innovation of Trap Kitchen alive with every sip.